A downloadable game for Windows and Linux

Currently we are at Version 1.1. We are proud of this release with full voice acting for the whole game. It makes it so much better.

Planet NOEGATO-BAS is controlled by FUELZ, a giant corporation. FUELZ has pipelines all over the planet and controls around 90% of the trade on the planet. Recently FUELZ shortened workers' wages on planet Noegato-Bas and also introduced a currency they pay it out in, that is only accepted in Rocket Town, the capital and spaceport of Noegato-Bas.

Dim is part of a loose cell of workers united unter the name of MOLOTOV. Their plan is to disrupt business of the FUELZ company and especially to destroy one of their pipelines in the southern district. You play as Dim and your task is to help him reach MOLOTOV's goals!

made with <3, coffee, blender & AdventureGameStudio

SCAVENGER
1st version of the character for the Jam

CYBERPUNKJAM
1 WEEK IS NOT ENOUGH, BUT THANKS FOR THE EXPERIENCE

Good job on the 3d models of the landscape and the character animation!

It was fun to do, but currently we have a painted and pixeled adventure in the works :) 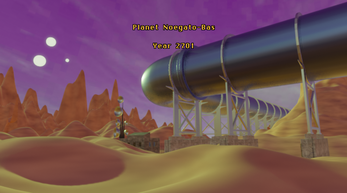 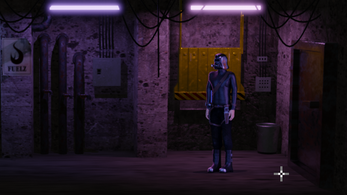